or how we got from there to here

Look Out Sh!^head has been a long time coming, like a dentist appointment or the asteroid in Armegeddon. We reached out to the estate of Éric Rohmer in 2019 and were given permission to work with the source material – his 1980s film cycle Comédies et Proverbes.

The idea was to write and rehearse Look Out Sh!^head in 2020 and premiere it onstage January 2021. Throughout the summer of 2020 we held out hope that maybe, just maybe live performance would be possible by the following January.

But we wanted to work on something. We missed being in rehearsal. We missed coming up with ludicrous shopping lists. So we decided to make some films. What was going to be a single piece was morphing into an ongoing series. Like St. Elsewhere but not in a hospital not ending up being all just a dream. More like X-Files then maybe.

Kara had translated all six films over the summer. As the material piled up, I (Travis) started working with Rohmer’s dialogue, treating its casual, naturalistic chitchat-language simply like raw material – like pitches, harmony, and rhythm. I made reams of new conversations this way that mixed all the films together, trying to find new patterns and relationships and resonances. 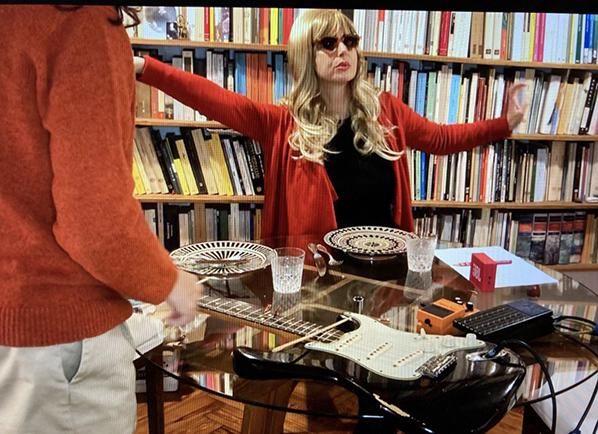 But our actors were scattered around the globe. So Kara and our collaborators (vid-David, set-Peiyi, asstdir-Britt) figured out how to construct shots and work out a system so the performers could monitor each other and keep up the collective dialogue on one device while filming themselves on a separate, second device. Each performer’s living room became a mini-film set. Each phone+laptop was a film crew. 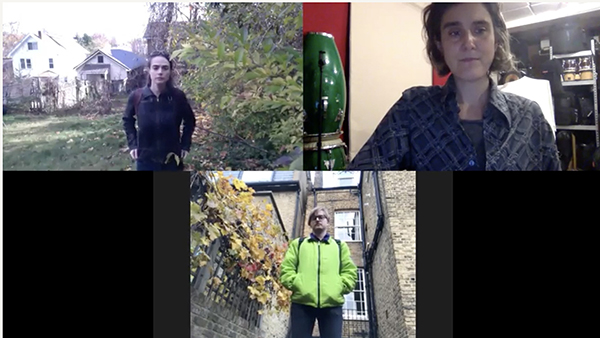 We shot tons of material. Like a parallel universe where Netflix commissions experimentalists. TV is boring so make your own. The old battle cry of the underground: DIY.

The Prologue streamed in December 2020, presented by Infrequent Seams.

Finally, by the summer of 2021 we were able to get together with our collaborators in a rehearsal room once again. But more on that soon… 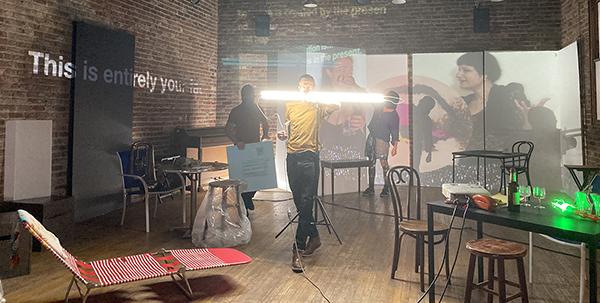 June 2021… cases are down, the warm weather is lifting everyone’s spirits and we manage to get a handful of actors and our designers together to work out some ideas in person (IN PERSON!!).

We convene for a week at the Brick Theater in Brooklyn armed with video projectors, corrugated plastic, some furniture and hours of video footage. 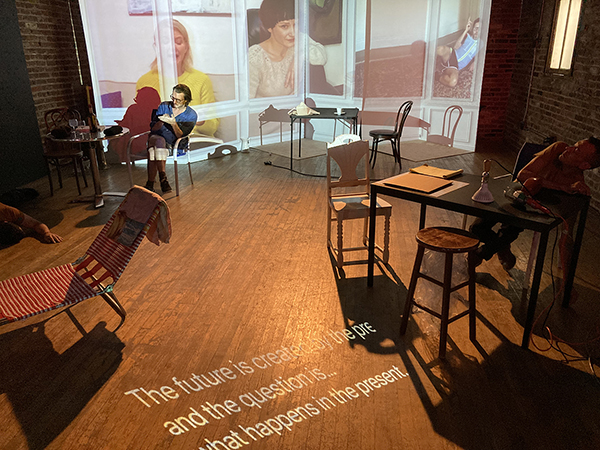 What’s our plan? To figure out what the live performance of this project could possibly be. We’re interested in the idea of disembodied romance, our love affair with actors on the screen, with the idea of trying to connect somehow (physically, mentally, psychically) with people who are in two dimensions. This is the weirdest, loneliest kind of love (the kind with crystals with fluorescent lights.) 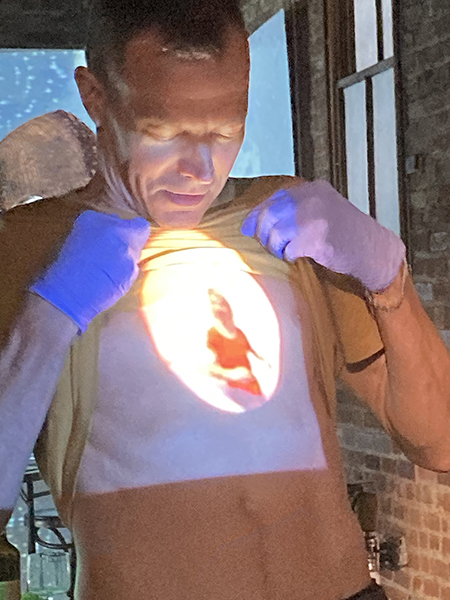 We create a working visual language, we have a plan. We’re using all the footage we’ve collected so far, plus pages of new dialogue. Everyone is looking for love and talking about love and trying to sleep with everyone else but really, it’s all just talk, talk, talk. 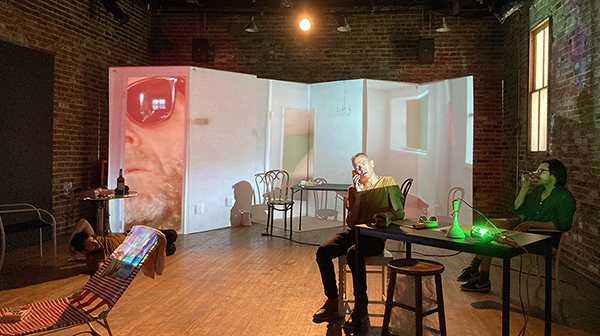 A premiere is on the calendar for January 2022 at La MaMa, but in the meantime, why not make another filmed Episode? What if we went to the opposite extreme and made something really, really visceral on video?

We get a 360-degree camera (nicked the idea from Boris and skateboarding vids) and start planning the shoot for Look Out
Sh!^head Ep2. There shall be no more off-camera. 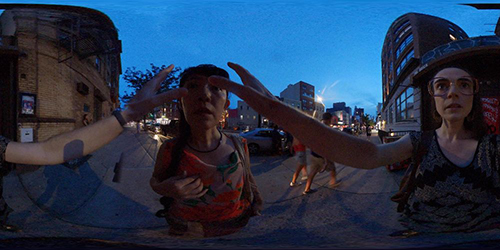 There is an eccentric acting class (an homage to Rivette’s OUT 1 tucked inside our homage to Rohmer..shhh…), and someone gets stabbed. There are stupid wigs, mango diets, fake wounds, and tons of fake blood. 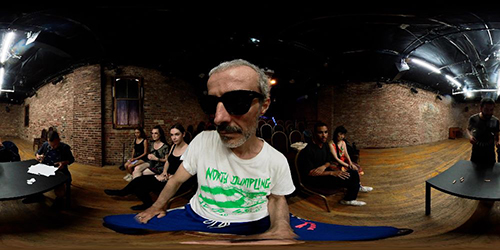 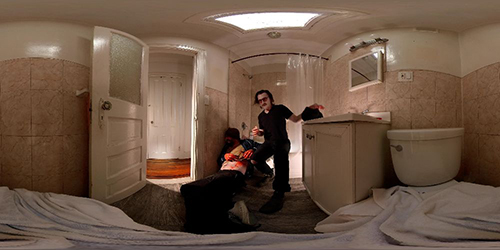 David, Peiyi and me (Kara) are huddled in closets and under risers, trying desperately to stay out of the shot – the unrelenting 360-degree gaze of the silly little extreme-sports camera – while trying very hard indeed not to laugh.

A friend actually watched the episode on a VR headset (not recommended! Nausea inducing!!) Yr phone or tablet works best. Watch it in the YouTube app for full panning+scanning rotational fun.

With that 360 nonsense behind us, in September 2021 we turn our attention to the premiere in Jan 2022: to finalizing a script, making a score, a set, all the bells and whistles.

And that January 2022 premiere date certainly, definitely, absolutely is nailed on not going to get derailed by anything.

Road to Sh!^head, Part The Last

It’s January 2022 and we head into a rehearsal residency at the spectacular and essential Collapsable Hole in the West Village. Good lord the wind is frigid hitting the Westbeth Center from the Husdon but we’re so honored and happy to be there it feels like a summer breeze. This is our first theatrical rehearsal in two years and we’re pumped.

We’ve spent the Autumn busy with zoom rehearsals and more video shoots. We get our Italian friends – Elena, Alessandra and Francesco – to shoot another couple of scenes together (yes, dreams do come true.) 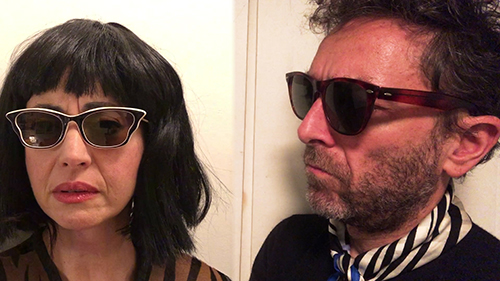 There’s also a plan for a massive in-person film shoot that will accompany the stage action of Act 2: a 30-minute long dinner party scene with pages and pages of obtuse drunken banter. We’ve been rehearsing with actors in 4 different countries over zoom and memorizing (how, I don’t know) all Autumn and can’t wait to shoot the thing at Peiyi’s pad when everyone gets to town in January.

The plan is 4 cameras, one following each performer as they meander through the scene and the apartment. Then we’ll project it with 4 projectors. Neat plan right? It’s fun having plans. 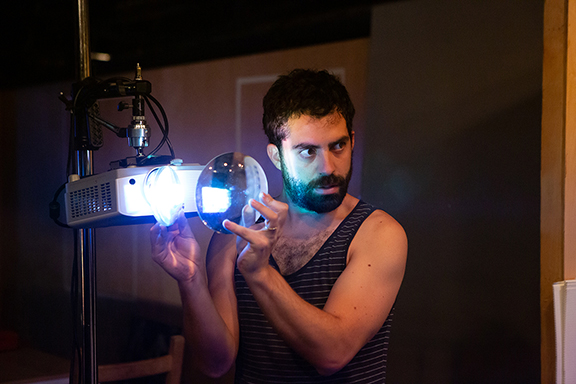 Meanwhile I (Travis) have been hitting the studio with John. The films didn’t have much instrumental music, just a couple of diegetic moments if someone turned on a stereo or something. But for the theatrical piece I thought we should do something different. La MaMa has a sweet baby grand, so I made a 70 minute piano score. 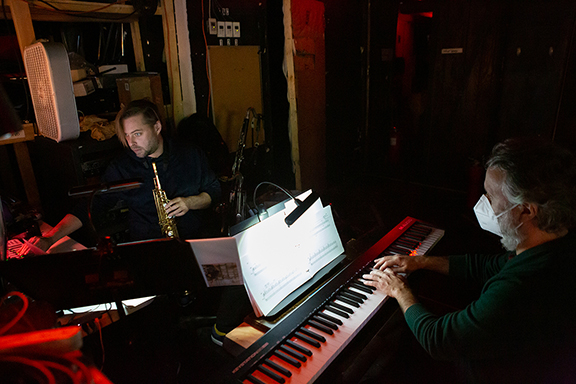 Then just as we are set up at The Hole and are about to kick off proper rehearsals (…wait for it…) it becomes clear that the enormous curve ball called Omicron is careening in our direction. Traveling cast members have to pull out, shows and festivals in NYC and elsewhere are being cancelled right and left, and it seems like following suit is the wisest choice. Postpone again. We’re good at it by now.

We decide to use our month at the Hole to build the show anyway. The premiere has been pushed to June. We change flights for travelers, find out who is available and get to work. The Act 2 dinner-party-film-aria filmshoot will happen over zoom rather than in person, but we have gotten really good at shooting 4 actors simultaneously in 4 countries. 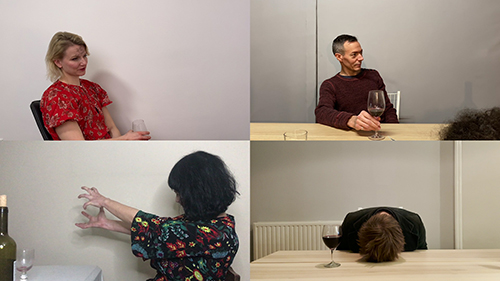 After a month of rehearsals (no one got sick!) we make a beautiful and complicated mess of a show. And here we are juuuuuust about to reconvene for pick up rehearsals in June.

Which brings us to the now.
Now is awesome.
Big fans of now. 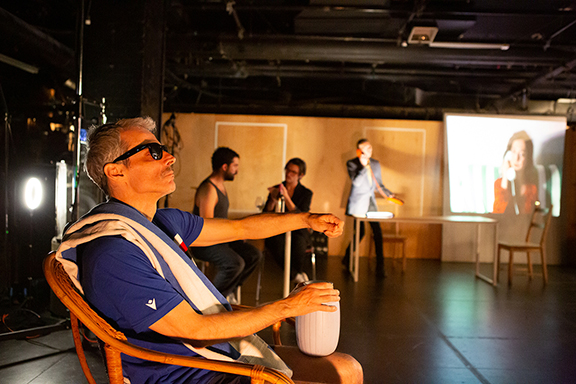 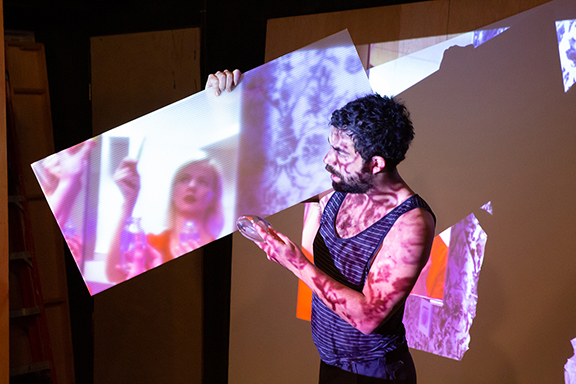 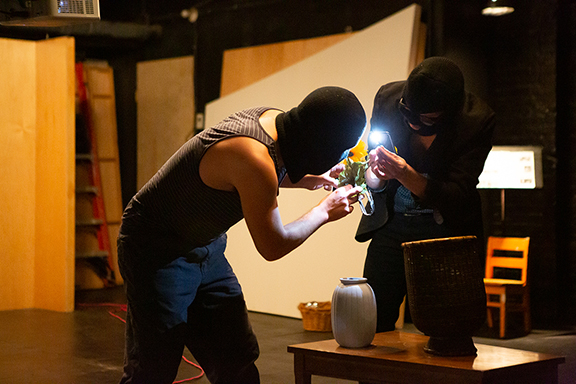 RETURN TO LOOK OUT SH!^HEAD